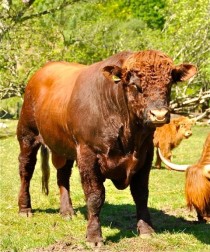 Dambuster is the Shieldaig Croft stock bull.  A three-year old pedigree Shorthorn bull, he stems from a long line of champions and is the half-brother of Braveheart (based at Balgay Farm), who was the male champion at the Highland show in 2009 and champion at the Perth Bull sale in 2010. Braveheart and Dambuster are sons of Chapelton Typhoon.

Dambuster himself is not shown as he is busy working in the Highlands!

Dambuster runs with our pedigree Highlanders to produce the Highland Shorthorn X, a hardy beast that can survive on poorer land, but creating a larger animal, which will does well at our local market for breeding onto other beef breeds.﻿

Shieldaig Croft works closely with the other farms in the family which include: Killochries Fold, Balgay and Drumcross farms.

The Killochries crossing program started in the spring of 2008.  The Beef Shorthorn, rather than the White bred Shorthorn was chosen because the milk production from the Highlanders is more than adequate to feed the larger calves that are produced. The Beef Shorthorn also delivers a better carcass.

The hybrid vigour generated from the first cross produces a calf that inherits the best traits from both parents.  In addition, being more efficient than the pure bred, the female has better fertility, improved milk production, good disease resistance and, in the case of the male, a faster maturing and more consistent carcass.

In the case of the female the effect of hybrid vigour can be enhanced by crossing again with a third breed sire be it Angus or Continental.

Killochries house the cross bullocks during the winter in the sheds at Drumcross with the best finishing off on grass at the end of their second summer. The remainder are housed for a second winter with even the smallest finishing well before two years old at a target weight of 550kg and a grade of R4L. This is the perfect butcher’s steer.

This year, Shieldaig sold half the XShorthorns to Balgay and will out-winter the other half to be sold in the Spring at Dingwall Mart.