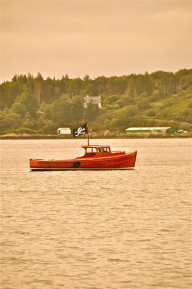 Gairloch historically was ruled by the sea. The Minch would have been a major sea route with ships trading up and down the western seaboard.  This is Mackenzie land, where the Mackenzie clan fought for years against the Macleods and cannon ball scars can still be seen on the Flowerdale Estate house. There is still much evidence of years gone with Bronze Age hut circles by Sand River and on the Torr as well as remains of a vitrified fort at An Dun.

Badachro, which is located on the opposite side of the loch from Gairloch, used to be almost covered in a raft of herring boats.  It is said that some of the sailing fishing boats such as the Zulu brought back Irish soil used as ballast for the return trip to Scotland.  This soil can be seen on some of the lush green lawns around the area. There are many fables and tales such as 'Leacnasaide' (rock of the arrow) where a single Mackenzie man picked off the invading Macleods using a bow and arrow from behind a rock.  The area is steeped in history and fable - some of it true but all of it interesting!

Today there is so much to do especially for those who like the outdoor life from catching Shellfish with Ian from Dry Island, Paddle Boarding around the bay, Golfing by the beach, walking the many hills, munroes and tracks, mountain biking, fishing, stalking, shooting, horseriding, strolling along award-winning safe sandy beaches, watching seals and otters in the loch to enjoying a glass of wine by the sea and sampling the local shellfish.  We have tried to provide a summary of some of them here.﻿